When the original BOSS overdrive stompbox, the OD-1, was first released way back in 1977, it looked very different from any other stompbox of the day. Where others were simple squared-off aluminum boxes crudely screwed together, the OD-1 was a smooth cast-metal body. It had no little button to step on to turn it on or off like the others. Most of the OD-1’s surface was the stompbox for the switch. Instead of the commonly used simple click switch that always caused an audio line POP when pressed, the OD-1 had a silent electronic switch under the pedal that never made a sound. It had recessed knobs; other stompboxes back then had big knobs protruding up from the case — very easy to kick and move or worse, destroy. And it sounded amazing! To this day, the BOSS OD-1 is sought after by collectors who know tone. Who would have thought that after 35 years, BOSS stompboxes would use the same design elements that were developed then, and would be mimicked by so many competitors. Why? A wise man once said, “If it works, don’t fix it.” Think about it. What other product has been in continuous production for more than 35 years, with the same looks and industrial design, and seems just as fresh as when it first was released?

There are ten original design elements common to all BOSS stompboxes. From the OD-1 to the  ST-2 Power Stack or the RC-3 Loop Station, they represent ten solid reasons why BOSS is still the guitar stompbox line that sets the standard for the world. Let’s take a look at these elements, to better understand their benefits and why they have withstood the tests of time (and millions of heavy-booted musicians).

It is well known that BOSS stompboxes are tough. The thick all-metal cast construction of the case is very durable and provides very strong protection for the circuitry inside. We have seen cars driven over them, after which they still work (we’re not advocating this, by the way), and in the early days, the BOSS engineers used to test them by literally throwing them out of a second story window. Every component is tested to withstand extreme use. The spec for the electronic switch, for example, specifies that it must be able to withstand a minimum of 100,000 stomps. BOSS has machines that test them by hitting this switch 100,000 times to see if they can withstand the abuse. They do. Which leads us to the next one…

Even after running over a BOSS stombox with a car, it still works. (<–Tweet this)

This is the longest standard warranty around. Why? Because BOSS knows that they can stand behind the workmanship and quality of construction of these pedals; in other words, they are really hard to break. Think twice about pedals that have shorter warranties.

There are actually two benefits to this one. In the early days of guitar effects pedals, the only way to change the battery was to open up the entire stompbox, (which usually required finding a screwdriver and removing — and not losing — microscopic screws, just what you want to be doing on a dark stage at a gig or at a rehearsal) and exposing the entire circuit board in order to get to the battery, which was usually just hanging by its wires inside. The BOSS battery compartment is under the pedal, which is spring loaded, so when you unscrew the front of the pedal, it pops open, revealing the battery. The other benefit is that the battery compartment is completely sealed off from the components, so if it ever leaks, it won’t contaminate or ruin the electronics.

This seems obvious today, but it wasn’t 35 years ago when BOSS was the first to figure out that knobs below the surface of the stompbox couldn’t be kicked, which at best changes your settings (and for some cosmic reason, always for the worse, not better) and at worst could break the knobs off. This concept has been adopted by many stompbox manufacturers, although many boutique stompboxes still have knobs standing tall on top of the stompbox. It’s really only a matter of time until they get kicked or worse.

5. Rubber Pads on Top and Bottom

The entire bottom of a BOSS stompbox is a big rubber surface. Why? Many other stompboxes use tiny rubber feet, or sometimes nothing at all. The big rubber bottom of a BOSS stompbox keeps if from sliding around on the floor when you stomp on it. This seems like another one of those simple concepts until you look at many other guitar effects pedals and realize that it is not so common. But you’ll appreciate it the night you use your pedals on a slick wooden stage. Your boutique pedals may slide away from you as you try to use them, but your BOSS effect pedals will be right where you want them to be: under your foot. Why rubber on the top? The simple answer is to keep your foot from sliding off the pedal when you want to turn it on. The entire surface of the pedal is covered with a rubber pad, so your foot can hit it without slipping.

BOSS was the first stompbox company to use this kind of switching. Rather than use mechanical click switches due to their drawbacks (they tend to cause unwanted loud pops in the audio signal and tend to break at inconvenient times, like when your playing your best solo), BOSS developed electronic switching for their compact pedals using FET components, which are very highly regarded for high reliability and noise-free operation. The benefits are pretty clear — no switch failures and no noise in the line ever.

When the band is rocking and you’re really getting into your playing, you don’t want to reach out and miss the stompbox button. After all, with many guitar stompboxes, you’re aiming at a target less than a half inch wide. On a BOSS stompbox, most of the effects’ entire surface is the stompbox, so you won’t miss. You can hit it from virtually any angle, so when you want the stompbox to be on, it’s on.

The LED on a BOSS stompbox has two functions. The more obvious one is to indicate that the stompbox is on and working. The other function is to indicate the condition of the battery. It’s better to know the battery is going before it’s too late than to find out the hard way — on stage, when you expect the sound to be there, and it’s not. A BOSS stompbox will always let you know before it’s too late that you ought to change the battery.

This one is very simple: BOSS stompboxes are color coded, so you can easily tell which is which when you’re using them. There have been some consistencies in the colors over the years.  For example, BOSS digital delay stompboxes have always been white, phaser shifters have always been green, compressors have always been blue, and flangers have always been various shades of purple. There have also been some colors that seem somewhat random. Distortion stompboxes, for example, have been everything from orange (DS-1, DS-2, and many others) to black (MT-2, HM-2, etc.) to red (XT-2), and several shades in between (although overdrives tend to always be some degree of yellow. Go figure…). Again, the point is so you can tell which is which in your rig. This is another BOSS first that some other stompbox makers have also caught on to, but many others still adhere to the same color, same look concept. Next time you get a chance, try out a pedalboard made of stompboxes that all look the same. In the heat of battle in the middle of a gig, on a dark stage with the lights in your face, how easy will it be to tell which is which? Not as easy as a rig full of BOSS stompboxes, to be sure.

Tone is what you like, and few things are more subjective, but with tens of millions of BOSS pedals out there, an awful lot of which are on top pro players’ stage rigs, it’s probably safe to say that BOSS stompboxes always sound right. (<– Tweet this)

These, then, are the big ten. From the first three BOSS pedals more than 35 years ago with the now-classic and iconic design (do you know what they are? Check the BOSS Facebook page to find out) to the amazing pedals in the current line, these ten time-tested design elements have helped to make BOSS pedals what they are — the undisputed market leaders in compact effects. 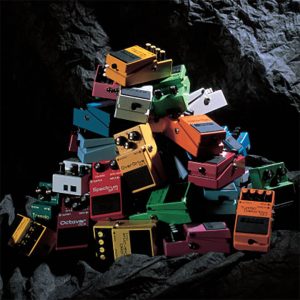 As a guitarist, Steve Henderson toured Australia, SE Asia and USA. As an author, he has written for publications such as Music In Action, Guitarist 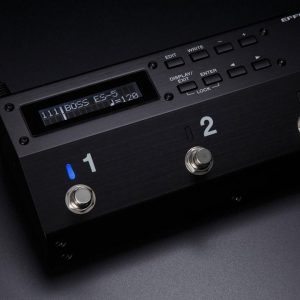 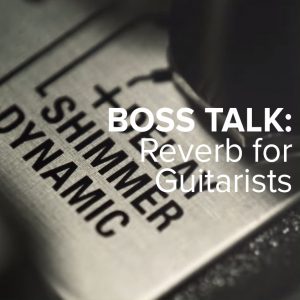 The BOSS Talk article looks deeper at the various types of traditional reverb of spring and hall, and the esoteric “shimmer” and modulate, to give your