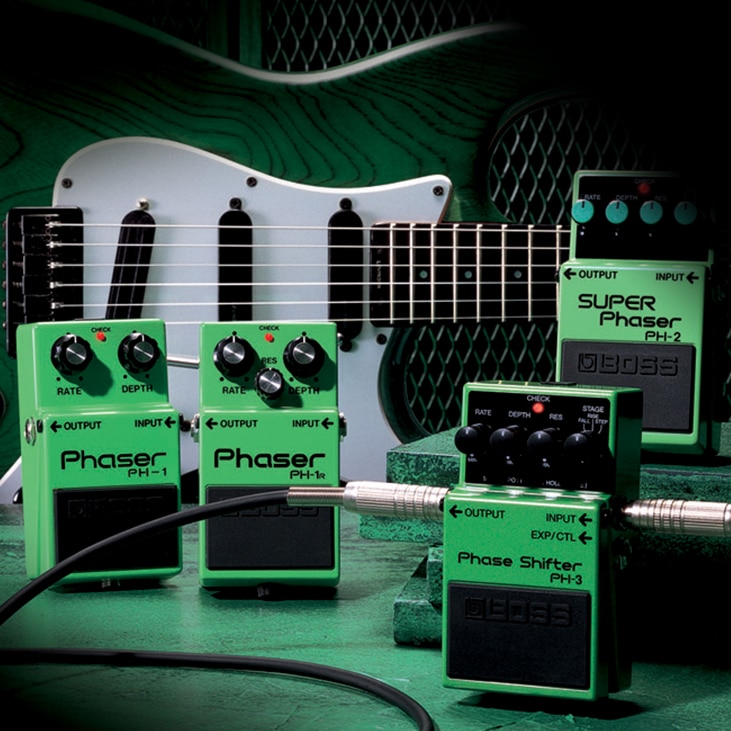 Contributed by I Heart Guitar BOSS released its first 3 compact foot pedals in 1977.  These were the OD-1 OverDrive, the SP-1 Spectrum (a parametric equaliser) and the PH-1 Phaser. The OD-1 is, of course, an enduring classic which paved the way for the OD-2 (1985-1994) and the current OD-3 (1997-present). The SP-1 found more favour with keyboard players than guitarists. It’s highly sought after today. But BOSS’s phaser offerings have grown and evolved over the years – along with the evolution of what phasers are expected to do. Let’s take a look at this evolution of the BOSS Phaser, through the now-discontinued PH-1, PH-1R and PH-2 and the current PH-3 Phase Shifter.

The PH-1 Phaser – The Pioneer of BOSS Green Machines

Available from November 1977 to November 1981, the PH-1 was designed at a time when the main goal of phasers was to emulate the sound of the Hammond Leslie cabinets. These were popular among organ players in the 70s, (and guitar players had been digging them for a while too). The PH-1 is a simple two-knob pedal with controls for Rate and Depth. It’s a 4-stage phaser with a 16-second to 100-millisecond range. Early phasers weren’t quite as adept at capturing the Leslie sound as players would have liked, but that didn’t really matter. Guitarists took the unique sound of the phaser pedal as its own entity, and started to exploit it for its own particular merits.

The PH-1R Phaser – A Resonance of the Original Gamechanger

The PH-1R was a four-stage phaser like the PH-1. But, it added a Resonance control to its circuit. Basically a feedback control, this gave players the ability to really crank up the ‘extreme-ness’ of the effect. They could still easily dial in the gentle swooshes and undulating bubbles of the PH-1. But, the Resonance control allowed them to supercharge this effect and get some really outrageous tones.

In 1984 the PH-2 Super Phaser addressed the problem of “Well… actually I think I would kinda like a setting that really sounds like a Leslie…” With twelve stages of adjustment for smoother, more ‘hi-fi’ phasing, the PH-2 offered two modes. One was for the standard phaser effect. The other was deeper, richer and more aggressive – perfect for the New Wave sounds that were popular at the time. The familiar Rate, Depth and Resonance controls were augmented by the two-position mode switch. The PH-2 remained in production until March 2001. Here’s a video comparing all three of these discontinued but much-loved effects. You’ll hear how they’re all part of the same family but each traces – and defines – the evolution of the phaser effect for its place and time.

Finally we come to the PH-3, the current BOSS phaser model, introduced in October 2000. While the PH-1, PH-1R and PH-2 were all analog phasers, the PH-3 is a digital design. This gives you far greater control over the characteristics of your phaser sound. There are still controls for Rate, Depth and Resonance but a seven-position rotary mode switch lets you select between 4, 8, 10 and 12-stage phases. It also has Rise and Fall modes, which give you unidirectional phasing sounds. In other words, always going up or always going down and a Step mode, which applies the filter modifications in a non-linear manner. The PH-3 has a few more tricks up its green sleeves. There’s an Expression Pedal input which gives you real-time foot control over the Rate function. This gives you the ability to ‘ramp’ from a slow speed to a fast one or vice versa. The pedal’s own effect on/off footswitch also doubles as a ‘set tempo’ switch when you press and hold it for more than 2 seconds. Since the PH-3 has been on the books for over 13 years now, and continues to sell by the carload, BOSS says it might just be the highest-selling phaser ever. It’s certainly considered a worthy successor to its analog ancestors. It’s capable of everything from sweet vintage tones to modern progressive metal.

Open Back vs Closed Back Guitar Speaker Cabinets – What’s the Difference?

If you’ve ever played a guitar amplifier, you could be forgiven for not paying close attention to the back of it. Really, why would you? 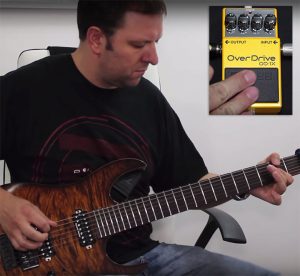 Classic Rock is All About Being BIG & LOUD The Classic Rock guitar effects combo Apply these tips to recreate the classic rock guitar sound.