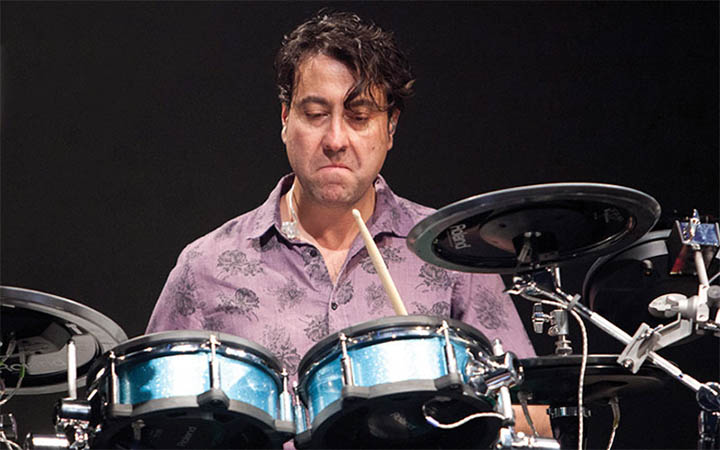 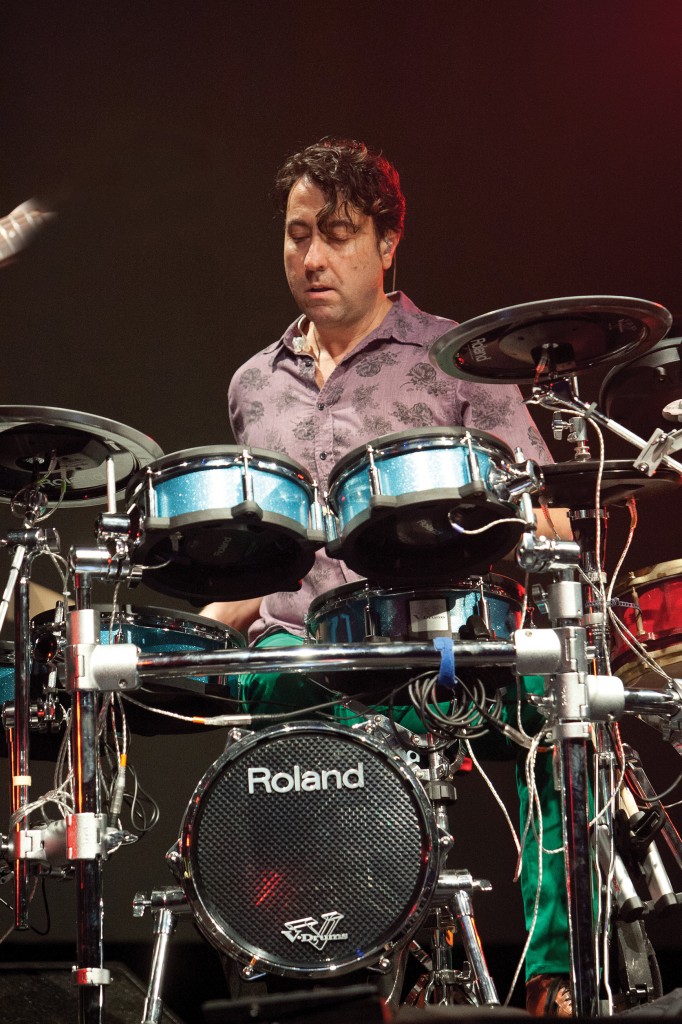 In addition to this, Joe is also a talented composer and Musical Director, penning music for Tap Dogs, and fusion dance troupe The Next Step (among others), and has held the MD position for David Campbell, the Tap Dogs and a number of other large scale productions including the 2012 & 2013 NRL Grand Final entertainment, and the 2012 Lord Mayor’s New Year’s Eve celebrations in Sydney.

In between all of these commitments, Joe has been busy touring for Roland Australia, performing clinics and product demonstrations all over the country. Joe performed at AUDW this year, supported by his long term collaborator Martin Hailey on guitar. I caught up with Joe after his AUDW performance.

Having recently performed on stage at AUDW and also on the Roland stand for their product demonstrations at the Expo each day, how did you prepare for the weekend, and was there any difference in the way that you approached the demos as compared to the main stage performance?

Absolutely. But may I preface this by expressing what a joy it was to perform at my first AUDW in the company of some fine drummers and a wonderful spirit. The Roland stand demos were basically a reflection of what I would normally do at our Roland clinics and product launches – playing a few of my compositions and improvisations as well as demonstrating the correlation between samples and emulating acoustic drum sounds.

For the performance on the main stage I wanted to prepare something unique and specific so I enlisted the talents of my guitar colleague, Marty Hailey to co-write a piece utilising his Roland RC-300 Loop Station & GR-55 with the TD-30KV & SPD-SX. The results were creatively enlightening and ultimately lots of fun but mind bending all at the same time! We somehow, in formulating our approach, realised we both had 21 patch changes in all, so we aptly named the piece “Ventuno”. Overall, I think we got through it and were received well. 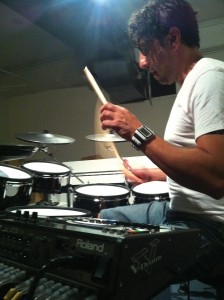 How does performing at a Drumming Event (like AUDW) vary from what you do in your regular musical life?

It varies in some respects but ultimately it’s about performance. I’m fortunate enough to work with artists that are open to their musicians being involved in the show on other levels but, AUDW is daunting in regards to perfecting your craft to the best of your abilities, knowing your limitations, executing your ideas and also providing an entertaining and informative presentation of your work.

Ultimately, a thoroughly enjoyable experience to present a close up encounter in a concentrated forum of great talent.

How long have you been incorporating electronics into your set-up? Was it something that you just had an interest in, or did the musical situations demand it?

Integrating electronics and drum machines has been part of my process of discovery since the late 80s, where I first used an Octopad. However, I guess I began using samples and drum machines in Tap Dogs for the 2005 World Tour, where I started to integrate pads and triggers in devising a standing electronic set up that would basically simulate a drum kit, without necessarily being a V-Drum set up. The idea was to trigger sounds that wouldn’t spill into the dozens of mics on stage that were amplifying the sound of the dancers’ tap shoes. More recently I was involved in the Sydney Festival’s Smoke and Mirrors, a multi-tiered circus/music spectacular where there was a need to play samples of sound effects, atmospheres, loops and percussion sounds. As with Tap Dogs the situation demanded the use of a sampling device so the Roland SPD-S was the perfect solution. It gave me the responsibility of enhancing the show directly and further augmented the role I was to play, one of playing the performance as a whole work rather than just individual themes and songs.

You played a Roland TD30 on stage at AUDW this year. What electronic gear do you currently/ normally use for your live gigs?

The Roland SPD-SX sample pad has become an integral and regular part of my set up. Whether it is triggering samples, entire tracks or even various recorded elements from an artist’s album audio, it has proved invaluable.

The denser memory capability and USB functionality has allowed me to play entire backing tracks as well as triggering samples and utilising the built-in effects. The simple click function is also handy when locking or syncing samples. I also run several trigger pads out of the SPD-SX for certain sounds or samples, mostly for layering snares with claps and percussion. I recently used the TD-30 on Channel 7’s Weekend Sunrise program. It initiated a “silent studio” environment with all band members effectively un-amplified and it proved quite a hit with the audio guys and broadcasters through its versatility and quality of sounds. I recently began using triggers on my acoustic kit, initially with the TD-20 and discovering its benefits in larger scale productions and concerts.

You play with many different artists, from David Campbell, to Human Nature, to Jimmy Barnes to name a few, and also your own musical projects. How does your set-up change for the different gigs you do?

Obviously, with the artists you’ve mentioned, their differing styles and genres suggest I would vary my set up according to what they were presenting on their shows and tours. David’s musical output is so broad, ranging from Swing, Rock and Musical Theatre. Recently, we recorded an 80’s themed album Let’s Go, where we got to let lose on our favourite drum sounds from the era and reproduce them live. It also gave me the opportunity to experiment with some samples, triggering recorded elements from the album as well some iconic sound effects and loops. Human Nature’s Motown show gave me the opportunity to solidify the great style of Motown drumming as well as layering sounds with percussion and also orchestral effects. With Jimmy…well it’s Jimmy Barnes! Big drums, fat snares and a “lay it down” attitude -that is the essence of his music. A high-energy experience that must reflect in the sound and remain true to its origin.

Do you find yourself using a lot of electronics in the studio?

Absolutely. Not only in sessions but also in my own studio set up. It’s an advantage to have an array of sounds and effects to offer any recording, and with the TD-30 and SPD-SX this expands my own recording capabilities and options. Messing around with samples and loops can often give a new rhythmic perspective to a recording that may not have eventuated on just acoustic drums. It can alter the trajectory of the music to another level that can also serve to enhance the performance whether it is ultimately acoustic or electronically generated. I’m sure you can deduct from this that I value and utilise both equally. V-Drums are an instrument that has a certain set of parameters that can be manipulated and programmed like any other instrument.

Do you have a method or formula you use when programming sounds? In other words, do you program before the session? Or, does the situation, the music, or the arrangements dictate the editing? Or both?

I’d say a bit of both. The music or song dictates the parameters of the sound and the arrangement dictates its execution. The advantage is also in the immediacy of the editing and changing of sounds and samples on the fly. In a creative environment this provides an outlet for experimentation as well as fundamentally providing a swift solution for sound enhancement and reproduction. I sometimes program loops and sounds independently of the Roland machines (in Logic) and then utilise their functions specifically for any given sounds, further developing and evolving them.

The TD-30 module is limited only by one’s imagination. I find myself constantly changing sounds, kit chains and patches before a performance utilising all its surfaces to give a new perspective on an existing piece or sometimes accidentally stumbling upon something entirely new!

Can you tell us about what gigs and projects you have coming up?

In the coming months I’ll be performing shows with Jimmy Barnes on his Pleasurehouse Tour, and then with DC (David Campbell) plus the odd concert event as features on Channel 9’s Mornings as well as continuing Roland Clinics in NSW and WA. I’m currently working on a group drumming presentation for the NRL Grand Final as well as working with Marty Hailey in recording and filming an expanded version of the music we premiered at AUDW.

Human Nature will visit home from Las Vegas for a national tour in December and I will continue to work in my capacity as Music Director for Tap Dogs with new seasons abroad in 2014.

Thanks very much for your time today Joe, It’s been an absolute pleasure talking to you.

For more info and to keep up to date with Joe, check out his website at; www.joeaccaria.com 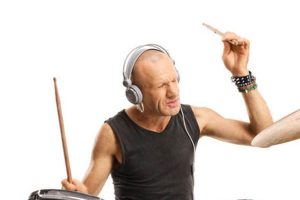 Why drumming is great for your health

We all know drumming is fun, but did you know it’s healthy as well? If you haven’t got the time or inclination to go to 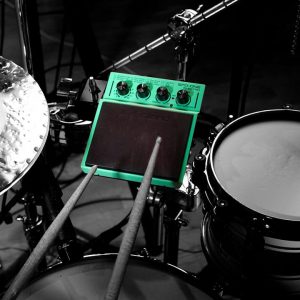 The drummer’s role as the timekeeper and driving force of the band has evolved over time. Expectations are high for us to enhance both the 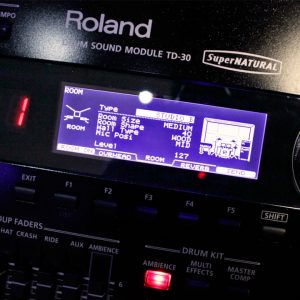 How to Use Digital Drum Effects in V-Drums

A drummer’s sound is not just down to the tone of the drum itself.  By using the built-in effects, it’s possible to just about recreate 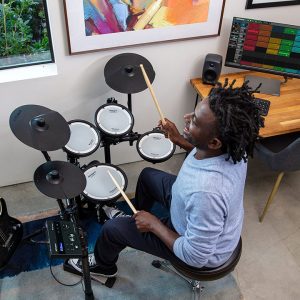 If there’s any single product that’s revolutionized the way we play drums today, it’s the humble electronic kit. Seriously, what’s not to love? Unlike their