What Is A Cajon?

The Cajon is an instrument with a rich and somewhat dark history. The word Cajon literally means box (Caja) or drawer (Cajon) in Spanish. Legend has it that 18th Century African slaves in Peru created the first Cajon. These slaves brought with them their rich drum and percussion tradition. Unfortunately, the Spanish colonial government were afraid that musical gatherings could be hotbeds for unrest.

In a move to curtail such social events, slave owners and police imposed a ban on traditional African drum music. The people’s spirit however, would not be so easily dampened and a deeply ingrained rhythm in their culture prevailed. Repurposed packing boxes left behind from the day’s work became the percussion instrument of choice. These boxes were easy to disguise as a seat or stool should the local constabulary happen past.
Today, buskers on the street, as well as bands in venues of all sizes, use the Cajon. The instrument has an earthy tone that provides a solid accompaniment for guitarists and singers. They are easy to transport and reliable, especially in acoustic sets where no power is available making them one of the most popular instruments used today.

The core design of a Cajon is simple and elegant. A wooden box allows for several striking zones. Playing close to the edge of the box produces a higher pitched sharper tone which is perfect for use as a back beat similar to a snare drum in a traditional drum kit. As you move closer to the centre of the front the tone lowers in pitch and introduces a woody thump allowing the player to use it more like a Bass drum or Toms.

Different scrape, pluck and muted or open hits create a range of interesting sounds. You can vary the pitch of the note depending on which part of the hand is used and by applying pressure to bend the wood with one hand or foot and hitting the head with the other.

Evolution of the Cajon

Over the years the original box design of the Peruvian Cajon underwent many changes. A thinner sheet of wood added to the striking side gave hits a snap and a sound hole usually found in the back of the box provided better acoustic projection. Perhaps the most recognisable advancement in Cajon technology came about when renowned Afro-Peruvian percussionist Caitro Soto met with Spanish Flamenco guitarist Paco de Lucia who was immediately enamoured with the instrument. Caitro gave his Cajon to Paco who brought it back to Spain and added a set of guitar strings against the rear of the playing surface giving the Cajon a snare-like rattle when slapped which helped the backbeat of the rhythm to cut through other instruments. The resulting Flamenco Cajon developed into the snare Cajon which is now the most popular and widely used variation of the Cajon worldwide.

Roland has now released the ELCajon EC-10. The ELCajon is a regular acoustic Cajon but Roland have added electronic features to allow for unique sound layering opening the instrument up to a whole new variety of genres. The EC-10 has two electric trigger zones, one located above the crescent design in the middle of the instrument and the other on the top edge. These triggers can access 30 different kits ranging from traditional Cajon sound reinforcement; to percussion sounds such as tambourine hits as well as a range of sound effects.

An internal speaker at the front of the ELCajon plays the instrument’s electronic sounds. Alternatively, for high volume applications there is a line output at the back of the unit. The carry handle on the back of the unit doubles as a sound hole. As well as this, you can power the unit using the included AC power adaptor or six AA batteries so you can use your ELCajon on stage, on the street or even on the train.

For those interested in getting started with a new ELCajon, check out the handy quick start guide HERE which details everything from how to play and microphone tips to controlling the threshold and balance of the electronic sounds.

So what are you waiting for? Get out there and start playing. 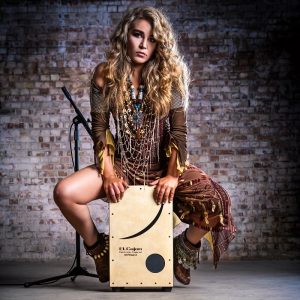