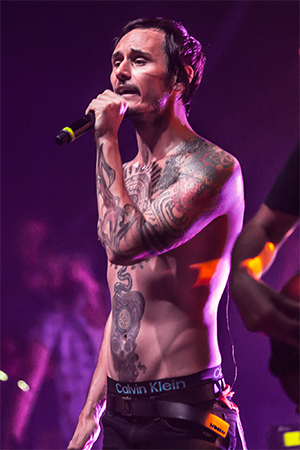 Melbourne’s tardy summer heatwave coincided with the beginning of the eagerly-awaited Polymorphism tour featuring Karnivool, Dead Letter Circus, and Sleep Makes Waves. Inside the Palace Theatre the DLC guys are sound checking in the key of comfort, barefooted or wearing thongs, shorts and wandering around the stage casually, working hard on getting the levels right. Come show time, everything changes. They don their performance personas and lock into show mode. Stewart arches his back dramatically to accentuate notes, Luke’s drumming gestures are more exaggerated and lead singer Kim is more resolute in his delivery. As the tour manager told our snapper, shoot the first three songs only and Kim will play up to you as well as the audience. After song three, he’s in the zone and only has eyes for the audience, feeding off what they’re giving. Tonight they’re giving a lot.

Dead Letter Circus has just come off a three month world tour plugging their August 2013 release The Catalyst Fire, another fine slice of atmospheric, prog metal. The reaction worldwide so far has been encouraging.  “It’s really great to see the response still building for the band over in the US,” says drummer Luke Williams. Singer Kim Benzie was more impressed with the reaction on the other side of the world. “It was amazing to rock into South Africa or Belgium and have people know the words to your songs and singing along. It’s pretty incredible,” he reckons. 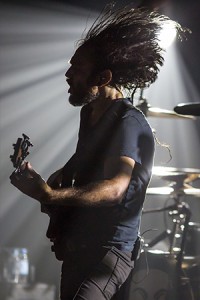 Both the new album, The Catalyst Fire and their debut, This Is The Warning carry a message. Dead Letter Circus is about planting a seed for thought within their fans, not only presenting a view of a world gone wrong but also asking what can we all do to fix it? A trip to the Amazon prior to the making of The Catalyst Fire and more specifically the use of Ayahuasca (a shamanic ritual concoction), was significant for Benzie in the way he began to look at the world and consequently the themes and lyrics for the album. “That was a very personal shaping affair,” recalls Benzie. “Anyone who has had an experience with Ayahuasca would know what I am talking about. That was a very reflective, important time in my life. That happened pre-writing too, so it was the perfect time for it to happen. I went into it very much separated from the programming and the scars you can inherit and look at it in an analytical way.”

The Amazon trip also led to the creation of the trippy album artwork. “I met this amazing woman who is an apprentice shaman there named Clara. She and her husband own a retreat there and all of the proceeds from the retreat go toward helping the indigenous people fight against the oil companies. She is an amazing artist as well and she firstly drew me a tattoo, which I wear on my chest. Then we asked her to contribute to the album art in conjunction with our artist we have here in Tasmania, Cameron. We did this weird correspondence by messenger because she is in the Amazon. There is internet in Peru but not where they are, so basically she would send some symbols that they would draw after a ceremony, then getting them scanned by a friend in the city in an internet cafe. They’d send them across, we’d mess with them and send them back waiting for her to approve it. It was crazy, a very stressful two months,” says Kim 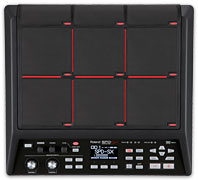 Reproducing The Catalyst Fire live relies on a combination of skillful instrumentation and pre-programmed studio sounds. Due to the technology available, and in particular the Roland SPD-SX, replicatiing the album faithfully was never going to be an issue. “We create a lot of organic sounds,” explains Kim. “We have a song called The Veil on which there’s a lot of stomping on pots and pans. There’s a really good bit of floor in Luke’s house which has this really deep resonant sound. We miked up the area and caught that and put it into Pro Tools and effected it, then dump it onto the SPD-SX and trigger those live, so that’s cool. On the new album we have this brutal, mechanical sound that appears a few times. Luke is doing that off the pads as well.”

In fact the SPD-SX and drummer Luke Williams play a pivotal role in the production of the band’s current show.  The band had been using the SPD-S for sometime and has just acquired the new model for the Australian tour. Williams is thrilled with the unit’s new features. 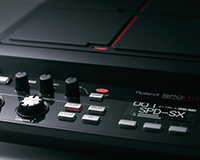 “The new SPD-SX this time has got those easy features when dumping in external sounds from the module. We create a lot of electronic sounds in the studio, which I have to then dump into this unit to play something. The feature with the new USB port is a lot better because you can just dump your WAV files directly onto a USB with a root directory, plug it in, then just to assign it out amongst all the pads on the unit, so it’s really easy,” says Luke. “The kind of music that we are writing now, it’s a hybridised thing where some of the sections of the songs will be written in the studio or programmed in the studio, so instead of just leaving that on a backing track, we decided that we’d really like to have me playing those programmed parts instead of leaving it on the backing track. That’s worked out well having this (the SPD-SX), so I can just dump in the sounds and it sits right beside me and I can just go directly from my acoustic sound onto my electric sounds, pretty much instantaneously.”

“The first song from the new record The Cure … myself and Stew are hitting simultaneously,” continues Luke. “He is hitting bass strikes and I am hitting bass synth pads. It can be melodic sometimes. In a song like Insider for example, it’s a really intricate programmed beat. I have to assign different sounds to each of the pads. You’ll see I am using the external pads as well because there are more than 9 different sounds on that song so I need the extra foot pedal, the KD-7, the two external triggers and there are so many sounds on the unit that I need different external triggers as well. It’s crazy. That particular song, Insider, the programmed  part is that intricate that I can’t play all of the individual voices so I am literally chopping time sections of the part and triggering off a new part of the sample as it goes along instead of playing each individual voice. I am playing up to a certain part, then triggering the next part and then the next part. It’s a different way of working with that one.” 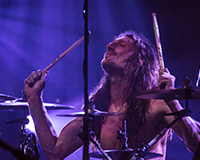 Using the new SPD-SX for the first time the night before, Luke had no problems navigating his way around the unit.

“No trouble,” he states. “This one is really easy. It’s got the big screen so it is all lit up the whole time, even when our lighting guy throws to complete darkness, it’s still got the LED screen there and it’s really easy to navigate through. I am blissfully just a couple of taps away from the next song. Having this module has just allowed us to become a much better band live. As I said, we’re taking stuff off the backing track that I can now play live and that’s really helping the live shows as well as elevate us to the next level.” 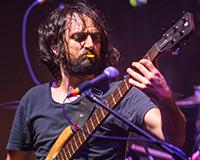 As the DLC run through songs at soundcheck, it’s obvious that all of the band members have accepted the blend of real instrumentation and technological additives with open arms. It all works together quite seamlessly. It’s a modus operandi which has served the band well for most of its touring life and left them unafraid to put new gear to the test. In the past, other bands who have toured with DLC overseas were curious to know about the JamHub, an innovative monitoring system that they’d been using. “The JamHub is a pretty cool story,” explains Kim. “We don’t use it so much in the jam room but we took it on our first three tours of America and used it as our in-ear monitoring system. It was pretty crazy. We had fifteen minute change-overs, no crew, so we literally had a task each. I would place it down, run some cables, everyone had a little remote from the JamHub where you could somehow see it. The other bands would be like, what is this thing you are setting up? They’d think it was a toy and then we’d give them a listen and they’d be like, holy shit! It’s displayed so well, it looks like a fun thing. It doesn’t look like a hi tech piece of equipment. We carted it around, 29 shows in 30 days, on the first tour. Every night without fail, it never let us down. I think we let it down a couple of times. It wasn’t in a proper case!”

Benzie is already playing around with some new song ideas which may surface on album number three. He’s also a keen student of the recording process and has learned much from his studio time thus far. “I am always looking over the producer’s shoulder to see how he is EQing things and how he captures things,” says Kim. “One thing we learnt or really utilised on this album, was to create all of the ambient sounds, all of the pads that you hear are all created from something in the music already. So there might be a vocal or a guitar which we will reverse, stretch out, reverb, put through a bunch of crazy effects. Make it sound like a preset, so to speak but better because it’s organic. It’s rich sounding and really ties in with the layers really well. It’s probably the funnest part about the recording. At the end, generally Stewie and I square off somewhere … and Tom … in creating pads … seeing who can get the best sounding pad on the record!” 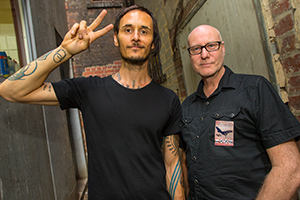 For the remainder of 2014, Benzie and band will get stuck into writing for the new album as well as looking to tour Europe and America again to build on the great inroads they have already made. “The next one is going to happen a lot quicker,” promises Kim. “There was a three year gap last time. It was a good progression of the slow burning revolution that’s going on within everyone. I am a bit fascinated as well. I haven’t written many lyrics yet I just dabble around with the melodies. They exist in a gibberish form with freestyle lyrics at the time. I have the vibe for the music, I know where that is going to go.” http://deadlettercircus.com/

The Complete Guide to the SPD-SX Sample Pad 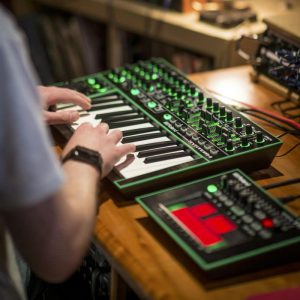 For the solo electronic artist, the most obvious option when it comes to performing live has long been the DJ set. These days, using a 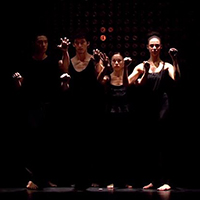 Nick Wales Interview: Writing Music for “AM I” Dance Production

As part of the 2014 Melbourne Festival, Sydney’s Shaun Parker & Company presented Am I, an ambitious dance production featuring the music of Nick Wales. 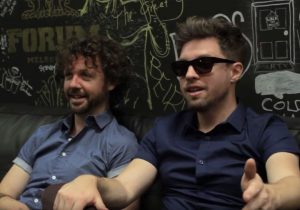 In September 2013, Australian pop rockers Eskimo Joe released Wastelands, their sixth album and one which presents a significant change for the band both musically 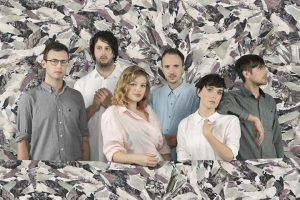 In late 2012 Melbourne six piece electronic pop band Alpine released their debut album ‘A is for Alpine’ to much acclaim. It features eleven pristinely