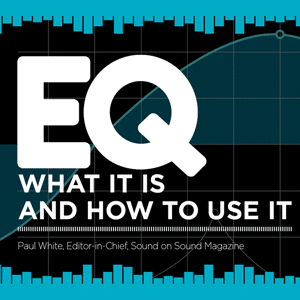 Tone Control for Your Music

What is Equalization (EQ)?

As far as music production is concerned, Equalization is really just a fancy word for tone control

– a device that can cut or boost particular parts of the audio spectrum.

EQ can be used both to create new tonalities and to help correct or equalize problems that occurred in the recording chain, though you should always strive to fix such problems first. While your home hi-fi might just have basic bass and treble controls, the studio equalizer, whether hardware or plugin, can be much more sophisticated.

Most serious equalizers include what are known as high-cut and low-cut filters, and they’re used as their name implies, to reduce the levels of the extreme highs and lows without affecting what goes on in the region between them. They can be designed with varying degrees of steepness expressed dBs/octave where the more dBs, per octave, the steeper the filter. A simple resistor/capacitor analog filter has a 6dB per octave slope, and this is sometimes expressed as being a first order filter. It follows then that a second order filter will have a 12 dB/octave, a 3rd order filter 18dB/octave, a 4th order 24dB/octave and so forth. Filters steeper than 24dB per octave can have an undesirable effect on the tonality with 18dB/octave being a popular compromise. High-cut is often used to reduce the level of high frequency hiss or to take the edge off a sharp sound whereas low-cut filtering is often used to reduce the level of deep bass or rumble caused by floor vibrations. A typical mixer has the low cut set to work at 80 to 100Hz and the high cut at 10 to 12kHz.

The bass and treble controls you find on your hi-fi are usually of the so-called shelving type and are able to offer both cut and boost. A low shelf cuts and boosts all the frequencies below its cutoff point by nominally the same amount, though with practical analog circuits, there is always a slope between the area where the filter acts and the area it is supposed to leave alone. The main point to keep in mind is that the filter slope doesn’t continue to rise or fall at X dBs per octave like the basic low and high-cut filters mentioned earlier but rather flattens out. Its graph looks like a plateau of shelf, hence the name. A typical mixer EQ offers a cut/boost range of around 15dB.

Parametric EQ is where things get interesting. Using these devices you can cut or boost frequencies anywhere in the audio spectrum with minimal effect on frequencies either side of the area of interest. If you think of unEQ’d music as being represented as a flat line on a frequency versus level graph, a parametric EQ can place a bell-shaped bump or dip somewhere along that line. Its frequency control sets where the center of the bump will be while the Q control sets how wide the bump will be. The higher the Q, the narrower the bump. A gain control sets how much cut or boost occurs at that frequency, so a parametric EQ has three main controls: Gain, Q and Frequency. Because this type of equalizer affects a specific band of audio frequencies, it is also referred to as a bandpass filter. On simpler mixing desks, you may find mid-range controls for gain and frequency, but only more sophisticated desks or outboard equalizers (or their workstation equivalents) have a Q control to let you adjust the width of the band being treated. If there’s no Q control, then you have a sweep equalizer, not a parametric.

A typical parametric EQ has around 15dB of cut or boost range and may include several separate stages so that you can dial in cuts or boosts in several parts of the audio spectrum at the same time. For example, you may want to pull down the level of a boxy resonance in the lower mid range while also adding a little definition up at 4 to 5kHz. A DAW equalizer may well have three or four parametric stages as well as both low and high cut and shelving filters. One very common technique when trying to find out which frequencies need cutting is to first set your parametric EQ to a Q of around one or two (a fairly narrow bandwidth) and then turn the boost way up making sure that the level is low enough not to add distortion. Next, adjust the frequency control so that it slowly scans through the whole audio range and listen as the filter picks out different elements of the sound – a boom here, a nasal honk there and so forth. Once you’ve found the offending frequency range you can dial in however much cut is needed to tame them. From the aforementioned descriptions, you might assume that an equalizer is simply a gadget that lets you adjust the balance of the various frequencies in an audio signal, and to a degree that is right. However, all analog EQs introduce phase shifts as they are adjusted, the outcome being that some harmonics are delayed slightly more than others depending on the frequency. These phase shifts are audible and contribute towards the final subjective result when an equalizer is adjusted. Indeed, the characteristic sound of many vintage equalizers is due to a combination of their filter slopes, the phase shift introduced and even subtle distortions introduced by the circuitry such as audio transformers and tubes.

Analog EQs and their digital counterparts are said to be minimum phase equalizers. However, it is possible to design digital equalizers that don’t introduce any phase shift and these are known as linear phase equalizers. They tend to sound somewhat more clinical but may be useful in mastering or other specialist applications. You may also come across the graphic equalizer, a set of overlapping bell filters spaced at regular musical intervals across the audio spectrum, for example, one third of an octave apart. The term “graphic equalizer” comes about because vertical sliders are generally used to control the level in each frequency band and these form a curve that mimics the EQ response you set up.

Knowledge Base: Understanding Your VS EQ

Some Quick and Dirty EQ Tips

The human hearing system notices EQ boosts much more than dips, especially if the region being treated is very narrow (high Q or low bandwidth). A narrow mid range boost, for example, may sound like a wah wah pedal stuck mid-way, whereas a cut at the same frequency and of the same width may be almost inaudible. This gives us the first general rule of EQ which is when you want a sound to stay sounding natural, don’t boost any region of the spectrum more than you have to and keep any parametric boost fairly wide. If you need to add a gloss to the high end, just use a shelving filter set between 8 and 12kHz and then dial in a little boost. That adds what engineers refer to as “air” without pulling the sound out of shape. Alternatively, if you think something needs to be made brighter, first try cutting the lows instead of boosting the highs as that can have a similar effect. Instruments can sometimes be made to sit better in a busy mix if you use the high and low cut filters to “bracket” individual sounds, removing unnecessary highs and lows. A common problem is to have too much low end in instruments other than the kick drum and bass guitar/synth, so low-cut filters are invaluable in cleaning these up. Your mix will sound cleaner for it. Always judge your final EQ settings with the whole track playing through; otherwise you can’t know how the various sounds will work together. And finally, try not to rely on EQ as a tool to repair substandard recordings. If you pay a little attention to the acoustics of the space you’re recording in (hang up a few blankets if it sounds too live or boxy) and then take the time to find the best place for the microphone, you shouldn’t need a lot of EQ. It is always better to get the best possible sound at source rather than trying to “fix it in the mix.”

Using the Graphic EQ on the M-200i 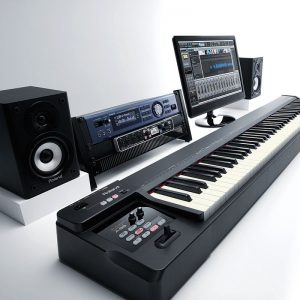 Improving your music production setup doesn’t have to be headache-inducing or break the bank; Today, home recording equipment is both affordable and compact. However, there’s 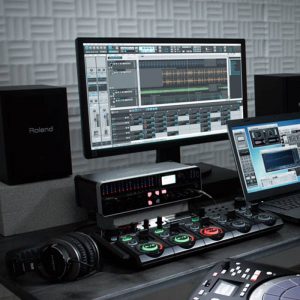 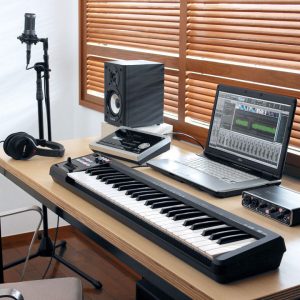 In past articles, we’ve looked at creating music with your computer setup. This week, we’re going to look at taking those recordings and polishing them

4 Tips for the Final Mix Down 1. Getting the Best Out of Autotune… The pizza is all eaten, the tracks are all recorded, and everyone