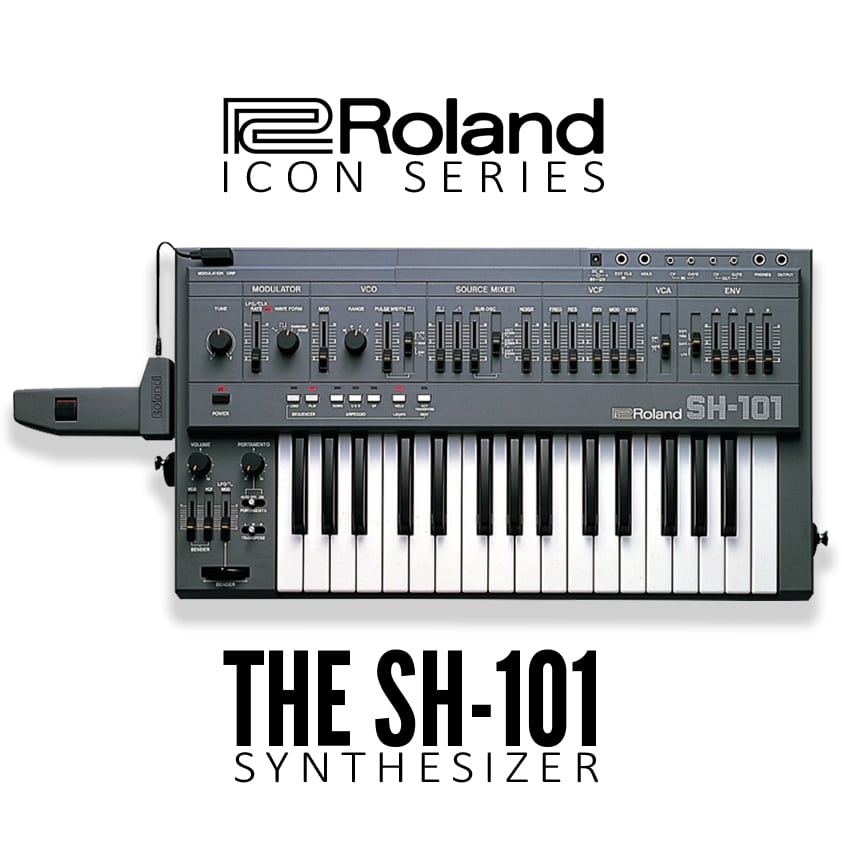 Roland has also made many instruments that have influenced countless musicians, bands and artists, and defined a number of musical genres.

This first article in the Roland Icon Series is on the classic Roland SH-101 synthesizer.

The year was 1982. Neon, spandex, brightly coloured makeup and big hair were en vogue – and that was just the men! It was all about glam rock, shred guitars and arena spectaculars and the synthesizer was king!

Keyboard players commanded the stage with shelves of synths at their disposal. There seemed to be a new synthesizer released every month and this era of music really pushed the technology of the time, and vice versa.

The early 80’s saw a boom period for Roland with the TR-808 Drum Machine, TB-303 Bassline Synthesizer and Jupiter-8 Synth, with each instrument helping to shape genres of electronic music to come. But when the Roland SH-101 monosynth arrived, it impressed even the most die-hard synthesizer fan.

WHAT IS A MONOSYNTH?

The Roland SH-101 is a monophonic synthesizer (or monosynth) meaning it plays one note at a time making it ideal for bass lines, leads and arpeggios. There are actually four sound sources played per one note – each sound blended via the SOURCE MIXER section (refer to the ADVANCED section for details on each sound). This means that each note can have four sounds played at once, giving the SH-101 a huuuuuuge punch through any band mix.

The SH-101 features a 2½ octave, 32-note keyboard and comes in alternate colours of grey, red and blue (plus the very rare white). It’s hard to think of another synth of its heritage that packs so MANY sounds in such a small package, but the features of the SH-101 is what makes it one versatile bass and lead synth machine.

FIVE EXPRESSIVE FEATURES OF THE SH-101

The expressive features of any instrument gives the musician a unique voice through their playing style, feel and technique. Each player will make their instrument sound differently from other players, and that connection is what makes an instrument a classic.

1. ARPEGGIATOR
The arpeggiator plays a repetition of notes triggered by the holding down the key/s of the keyboard, and works in “up”, “down” and “up & down” arpeggio patterns. When used in combination with the filter and envelope, the SH-101 becomes a percussive and melodic machine! Manipulating the transpose and hold functions, along with the portamento, makes playing this synth live a lot of fun.

2. SEQUENCER
Along with the arpeggiator, a digital 100-step sequencer can store a sequence of played notes to create a looping melody or bass line. You can add rests and slars (or ties) to the sequence via the REST and LEGATO buttons. The rate of both arpeggiator and sequencer is controlled via the LFO/CLK RATE or external source via the EXT CLK IN.

3. BENDER PITCH/MODULATION WHEEL
The SH-101 was one of the first keyboards to feature Roland’s popular all-in-one pitch bend/mod wheel: The bender. This expressive lever not only controls the VCO (pitch vibrato) but also the VCF for that characteristic aggressive “growl” effect. Pushing the lever forward also controls the depth of effect giving the left hand a lot of expression over the synthesized sound.

4. PORTAMENTO
Portamento is a slide from one pitch to another with the rise/fall time controlled by the PORTAMENTO time knob. By varying the attack of playing from staccato stabs to legato, the pitch can glide smoothly between notes for some soaring lead rises or laser-like zaps and squelches. A switch selects between ON, OFF or AUTO (legato only) mode.

5. MODULATION GRIP
The MGS1 modulation grip set took the synthesist from behind the keys to center stage! Being so lightweight, the SH-101 was easy to strap on and hold by the grip to compete with that pesky soloing guitarist! But the grip was not just included for aesthetic reasons – it also had a bender and LFO MOD switch to give better access to the expression controls for those important synth solos! 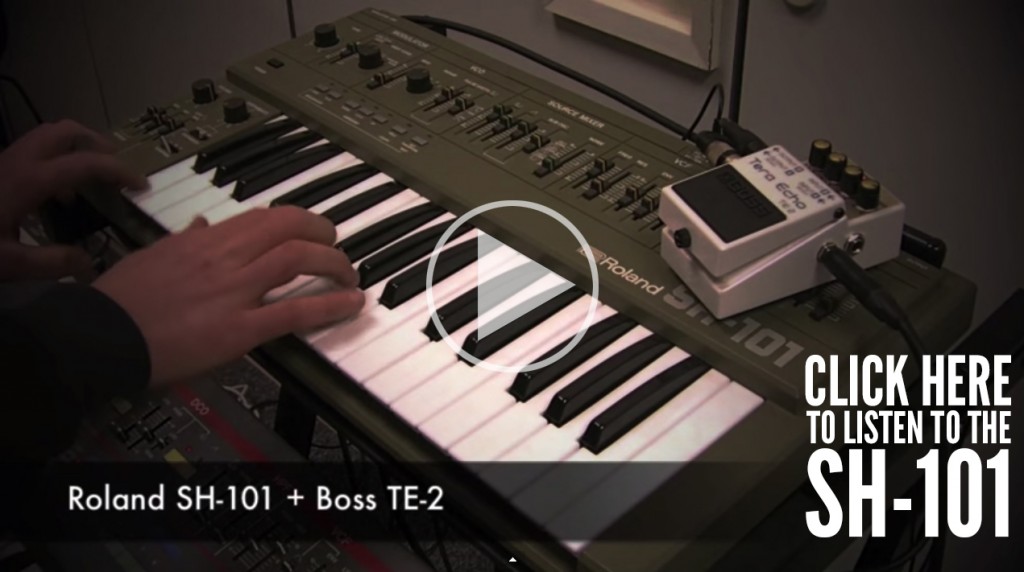 With so many expressive performance features and four sound sources able to mixed together via one played note, the versatility of the SH-101 is nothing short of impressive. The original manual has 39 patch settings that include; traditional instrument synthesis (flute, clarinet, and violin); classic synthesis sounds like the Tomita-esque whistle and synth drum; and some very “out-there” sounds… we’re looking at you “Funny Cat”!

The popularity of the SH-101 rose with the dance music explosion in the 90’s as techno, electro, house and rave music ruled the underground in Europe and the US. By the late 90’s, these sounds were making their way to mainstream dance and Top 40 pop.

The -1 or -2 octave sub-oscillator made the SH-101 a bass line monster. The SH-101 could make snappy, squelching bass lines using its signature resonant filter or a loose and “rubbery” bass tone by setting a higher release time in the ADSR and adding some portamento.

But it isn’t just bass lines where the SH-101 ruled. The combination of saw-tooth oscillator and modulated pulse width oscillator makes the SH-101 an excellent lead machine with the expressive pitch and modulation options capable of sounds from smooth to screaming! Plus, the noise source and random LFO waveshape makes it a great sound effects tool for powerful filter sweeps, and bleeps and bloops aplenty.

This small package can create sounds that can lift a dance floor and a rumble that can tear the house down!

Let’s take a closer look at the SH-101 and see how each block makes an impact on the classic sound.

•  There is only one VCO (Voltage Controlled Oscillator) but it sure has some power! It has two waveforms: pulse and saw-tooth with a four-step range switch (16’, 8’, 4’, 2’). But what gives the VCO its punch is the ability to mix in a white noise source and dual octave sub-oscillator.

•  A large part of the SH-101’s definitive sound is in its resonant filter; a VCF of similar lineage as the one found in the Juno and the MC-202.

•  The cutoff frequency cuts down to zero with the strong resonance producing a pure sine wave at higher settings.  At high resonance settings, the VCF can act as a separate oscillator for theremin-esque sounds to speaker-crushing kick drums.

•  The SH-101 has one ENVELOPE GENERATOR (or EG). The envelope comes in four stages: Attack, Decay, Sustain, and Release. The EG is shared by both VCF and VCA. The envelope can be either retriggered with each new note or can complete its four-stage cycle for more dynamic effect.

•  Aside from VCA modulation, the LFO (with sine, square, sample-and-hold waveforms and noise) can be used to modulate the pitch for trill sounds, effect the pulse width of the VCO and provide that “growl-like” aggressive filter sound that the SH-101 is admired for.

•  The overall modulation of the VCA has a strong influence over the number of capable sounds in the SH-101. The ADSR of the EG can recreate realistic instrument-like “blown” or “strung” sounds. The LFO can modulate the VCA for rhythmic, percussive and esoteric sound effects.

Now you can have the SH-101 software synthesizer on your computer with Roland Cloud!

Through direct involvement with the original SH-101 engineers, our SH-101 plug-in painstakingly recreates the hardware’s sound down to the behavior of the original circuits. It has all the great sounds and features of the original instrument, plus new features that extend its capabilities: