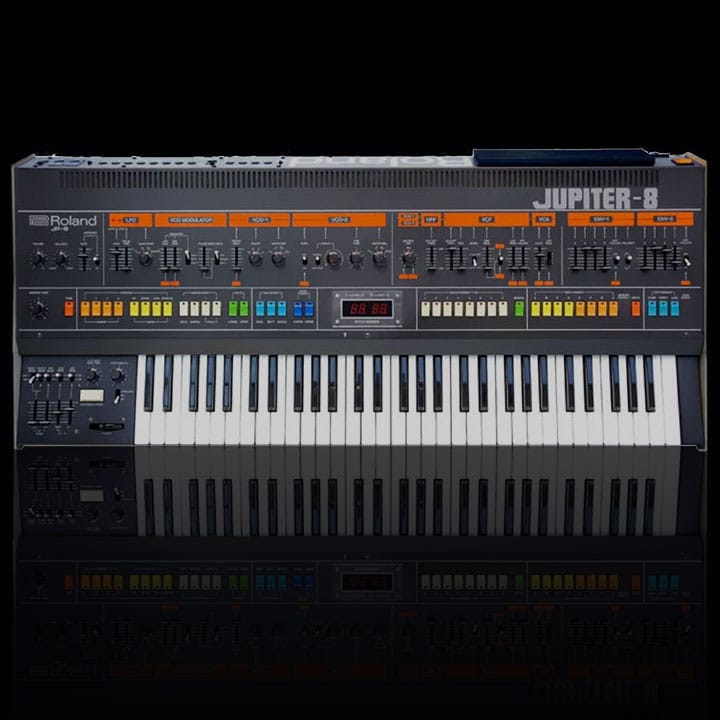 The Roland Icon Series is a collection of articles looking back at the most popular and recognized Roland instruments. In over four decades, Roland has designed many world-first instruments like the first touch-sensitive keyboard and the first guitar synthesizer. This article looks at the legendary Roland Jupiter-8 Synthesizer, released in 1981.

Contributed by Hannah Lockwood for the Roland Resource Centre

By 1981, Roland had already broken ground with its series of monophonic and modular analog synthesizers. Roland’s first polyphonic synthesizer came in 1978, with the release of the Jupiter-4. This was a 4-voice, polyphonic analog synthesizer that utilized digital control of analog circuits. Labelled ‘Compuphonic’, its sonic capabilities were restricted by the inherent limitations of its voice architecture. The need for a keyboard instrument capable of producing 16 voices heightened at the start of the 1980’s, leading to the development of a number of now-legendary professional polyphonic synthesizers, including the Jupiter-8.

As Roland’s flagship polysynth, it was renowned for its rich analog voices, capable of producing lush pads and otherworldly leads. Its diverse sonic range, dedicated controller for each sound parameter and advanced keyboard, made it favorable with the pop stars and stadium-fillers of the time. These qualities have seen it become one of the most beloved polysynths of all time. Featured on seminal records like Michael Jackson’s Thriller and Duran Duran’s Hungry Like the Wolf, the Jupiter-8 came to define the sound of 80’s pop and continues to inspire musicians today.

The Jupiter-8 is an eight-voice, polyphonic, analog subtractive synthesizer. It hosts a 61-note, 5 octave keyboard with the ability to change Key Modes, Assign Modes and save Patch Memory.

Known to be the fattest and largest sounding of all the classic vintage Roland synths, each voice of the Jupiter-8 consists of 2 VCOs. VCO1 has 4 waveforms – triangle, sawtooth, pulse and square waves – which can be moved across 4 octaves. The square wave of VCO2 is replaced by a noise generator and comes with an additional LOW FREQ switch. The Jupiter-8’s unique voice structure produces an impressive array of sounds, retaining its popularity and relevance decades after manufacture.

A switch in the VCO Modulator section allows you to choose whether VCO1, VCO2 or both are affected by the modulation. Separate sliders control the amount of modulation from the LFO and ENV1. The LFO offers four waveforms – sine, saw, square and random (sample-and-hold). It also features control over rate and delay, with a dedicated slider for each. A second LFO can be triggered by the large white button next to the pitch bend control. Two switches enable VCO and VCF modulation and individual sliders control the amount of modulation for each.

The Jupiter-8’s simplistic mixer section balances the level of VCO 1 and VCO2. One slider controls the amount of cross modulation of VCO1 and VCO2. Pulse Width Modulation (PWM) level is also set by a slider, with a switch to select between LFO, ENV-1, or manual PWM.

The filter section consists of a flexible low-pass VCF, with a switch to move between 2-pole (12 dB/octave) and 4-pole (24 dB/octave). The low-pass VCF also features controls for frequency and resonance level and can be modulated by one of the envelopes, the LFO and keyboard tracking. Individual sliders for ENV MOD, LFO MOD and KEY FOLLOW control the modulation level of the three sources. The Jupiter-8 also features a non-resonant high-pass filter, with a dedicated slider for Cut-off Frequency.

The Jupiter-8 has two envelopes, with dedicated sliders for Attack, Decay, Sustain and Release. ENV1 can be used on the VCO Modulator or VCF and can be switched between regular and negative polarity. ENV2 is hardwired to control the VCA, with a slider to control the amount of envelope applied. Key follow can be turned on and off for each envelope.

Released before MIDI was introduced into synth design, the Jupiter-8’s DCB Digital Interface enables connection to other devices. It also features external input, for control of the VCA and VCF, as well as an input for syncing the arpeggio to an external clock source. The sync input can be set to 8th notes, sixteenth notes or triplets in the arpeggio. The back panel also features two sets of 1/4” and balanced XLR outputs, with an output for each side of the split or each patch in dual mode provided.

The Jupiter-8 offered many notable features to achieve its unique, character sound.

The Jupiter-8 can be used in three different Key Modes; Whole, Dual and Split. Whole mode assigns a single patch sound across all eight voices, over the entirety of the whole keyboard. Dual mode offers a layered sound, with two patches sounding with each key press. In dual mode, the keyboard moves into 4-voice polyphony with two voices playing separate patches for each note. A slider controls the balance between these patches, in both split and dual modes. Split mode was a revolutionary feature that set the Jupiter-8 apart from other synthesizers of the time. Split mode allowed the user to assign one patch sound to one side of the keyboard and another patch sound to the other half of the keyboard. On the newer Jupiter-8’s, the split point could be moved to any desired location on the keyboard and could be saved in the patch preset memory.

3. ARPEGGIO
The arpeggiator on the Jupiter-8 is powerful and flexible. It is switchable over 5 octaves and has 4 different modes – up, down, up + down, and random. In Split mode, the arpeggiator works only on the lower split side of the keyboard, leaving the top half free for non-arpeggio lines. Syncing the arp to external equipment through the DCB interface, the CV jacks on the rear panel or through a contemporary MIDI kit, will allow you to use your Jupiter-8 with MIDI. Use the arpeggiator for sequencer-style lines and split the keyboard to perform alongside the arp sequence.

One key feature of the Jupiter-8 is its unique user Assign Modes; Solo, Unison, Poly 1 and Poly 2. Solo mode turns the Jupiter-8 into a monophonic synth, with all 16 oscillators combining on each note. Use this mode for a thick sounding, monophonic bass line or lead. The difference between Poly 1 and Poly 2 modes is the release time of the last note played. The Jupiter-8 also includes a Unison mode, which allows all 16 oscillators to be dispersed over the keys being played. When one note is pressed, the 16 oscillators are stacked onto that single note and are divided across the keys as more notes are played. At the time of its release, this feature was unique only to the Jupiter-8.

5. BENDER
An assignable bender can be used to control the pitch and/or filter frequency. Individual switches turn the effect on and off, while sliders set the amount of bender modulation for the VCOs and VCF. There is also a wide bending option, which scales the bender to more extreme ranges.

Since its inception, the Jupiter-8 has undergone numerous reconfigurations. Throughout its production, there were several changes made to improve its reliability and ease of playing. Early changes included upgrading from a 12-bit to 14-bit D/A converter to improve tuning stability. Brighter LEDs were also added and eventually a DCB port was introduced as standard to the Jupiter-8 design. In 1983, a scaled down version was released, reducing the 8-voice polyphony to 6-voices. This allowed the Jupiter-6 to hit the market at half the price of its predecessor. With the introduction of MIDI and improved tuning stability, the Jupiter-6 has gone on to achieve cult status in its own right.

The Roland MKS-80 Super Jupiter was manufactured from 1984 to 1987, and came from the same lineage as the Jupiter-8 and Jupiter-6 synthesizers. Closer in voice architecture to the Jupiter-6, it was the only instrument in the MKS series of synthesizers to have fully analog, voltage controlled oscillators.

1996 saw the release of the JP-8000 analog modeling synthesizer, which sought to reproduce the warm analog character of the Jupiter-8 sound. It offered a number of features that were not typical of other analog modeling synths, including a unique Supersaw waveform, which became particularly popular in trance and hardstyle genres. It also featured a built- Control function that allowed operations on the panel to be recorded and played back.

With Roland’s acclaimed Analog Circuit Behaviour (ACB) technology, they introduced the limited edition JP-08 as part of the Roland Boutique series which gave hands on control and the iconic JUPITER sound but added extra LFOs and an expanded VCO range. With an array of 36 knobs and sliders from the original JUPITER-8 front panel, the 4-voice JP-08 was highly programmable and encouraged sonic experimentation. Roland also added to the JP-08 extra LFOs and an expanded VCO range.

Now, with the release of the amazing new JUPITER-X and also the JUPITER-Xm you can have the look and sound of the original Jupiter-8, but with so much more sound design and creative music creation capability!

JUPITER-X combines classic Roland design and premium build quality with a powerful new synth engine. It faithfully recreates sought-after instruments from Roland’s long history of genre-defining sounds. And with multiple layers, loads of polyphony, and deep hands-on control, you can craft huge, spacious sounds that have as much sparkle as they have warmth and punch.

The 61-key JUPITER-X is the peak of Roland sound quality and design. Its all-metal build uses premium materials throughout, and the all-new aftertouch-enabled keyboard is the best we’ve ever made. A familiar layout and large array of controls let you dig in and easily shape your sounds, whether you’re composing in the studio or performing on stage.

The JUPITER-Xm has the same incredible engine built in, yet it is self-contained and ultra-portable and an amazing idea machine.

It has the same universe of sounds as the JUPITER-X and is expanding all the time.

The JUPITER-Xm is an entire electronic production and performance environment that you can put under one arm.

For an in depth guide to the Jupiter-X/Xm, visit the JUPITER-X & Xm Ultimate Guide!

Now you can have the JUPITER-8 on your computer with Roland Cloud!

This meticulous plug-in reproduction is accurate down to the circuit level, while also enhancing the original spec with modern features